Antigua is a small island in the Caribbean. As the island is a luxury tourist destination, there are many small hotels and resorts scattered across the country. If you were a guest at one of Antigua’s small hotels before the late 1980s, your reservation would have most likely been handled manually by a desk clerk who would have filled out a paper form in ink. It would then have been put it in a file drawer for later reference.

This manual procedure became obsolete by 1988. Salomon Doumith, who had just graduated from the University of Miami, formed a company with his partner, Riccardo Romei, and worked to bring Antigua’s small hotels into the information age. The company born from their vision is Antigua Computer Technology, commonly referred to as ACT. The company’s first product, a hotel guest management software, was a billing and reservation system that allowed hotel administrators to track reservations, know who was in their rooms, how much their guests were to be billed, and what taxes they were required to pay.

In its early years, Antigua Computer Technology continued to evolve software programs for hotels and other clients in the island nation and beyond. ACT created a program used by a finance company for the issuing of loans, a British West Indian payroll system, software for used-car inventory tracking, as well as many other products. However, Salomon, who describes himself as a technical and “hands-on type” of person saw that along with these applications, there was an obvious need for the computers to run these programs. “It was at this time that we got into the importation of computers to supply these small hotels and other family businesses,” he says. “And, as it grew, we started getting more into hardware.”

In 1990, Antigua Computer Technology also began to provide network administration for its hotel clients who had no formal IT departments. “We became their IT staff,” he says. The company also expanded into the government sector as the need for automation was rapidly growing. As the company grew, ACT began to provide needs analyses for companies, as well as supplying them with the hardware that was required. “We came in during that period of time where everything was manual, so we were designing accounting systems with Point of Sale, along with the necessary training needed for such services,” Salomon explains. “We started in software development and as soon as we saw the need for more expertise in the hardware field, we got directly into it. It was a niche market – software development, hardware, and training.”

The company also began assembling its own PCs (Personal Computers). “Having brand name computers was always an expensive thing,” says Salomon. “So, we built our own brand – Antigua Computer Technology computers. With that, we not only brought the technology to Antigua, we made computers affordable and we trained persons how to assemble, repair, and how to program a PC.  We had different types – educational, personal, as well as commercial. We grew the company at a fast pace into every single sector of the market; we captured over 70 percent of the computer market in Antigua during that time.”

As clients’ needs for both software and hardware began to explode exponentially, Antigua Computer Technology kept up with the frantic pace. “As the demand for these PCs were growing, so did the need for internet access,” Salomon remembers, “This was 1995-96, and we were configuring these PCs, getting them to the end users, and allowing them to have internet access. What we provided complimented one another and, in 1999, we were granted both the license by the government to be an ISP (Internet Service Provider), and were also given a license to operate a VSAT (A Very Small Aperture Terminal – a two-way satellite ground station with a dish antenna). This afforded us the opportunity to provide more affordable internet in Antigua.

“We expanded into wireless internet technology in the days when there was no Wi-Fi,” Salomon continues. “A company in Virginia built an antenna product that was used to extend the now Wi-Fi signal to go up to six miles while allowing more speed than the wire technology. ACT was the first in the region to build and provide this high-speed wireless internet technology with coverage of over 70 percent of the island. We had to erect towers, power supplies, back-up power, antennas – we flooded the country with these antennas to deliver the then high-speed access.”

Today, Antigua Computer Technology has grown into the island’s largest, single source technology provider. “We sell every aspect of technology from the PC to the software, from power to switching, from cabling to internet access, from sales to after-sales support.  ACT even provides the training that is required to fulfill this demand,” Salomon says. “We provide analysis, design, sale, installation, and maintenance of all computer technology products and services. For example, we will analyze your drawings of a new building or an existing building, and design the infrastructure for the network cabling, Central UPS, and power distribution. We will design and install a cutting-edge data center while providing you with the cooling and UPS backup power, complemented with the servers, storage, and data security solutions, with a 24/7 support system. We are proud that ACT provides end-to-end solutions.”

APC – ACT – We Do Power and Cooling

This year, Antigua Computer Technology is launching several new initiatives that have the goal of “bringing our community into the future,” says Andrew Doumith, Salomon’s son who recently joined the firm. The first is cloud services. “The infrastructure is presently in place, and this product should be launched in about eight weeks, where we’ll be offering back-up as a service for business continuity, and a new service to monitor networks,” Salomon reports. “Let’s say there is a company that needs to test its software and they do not have the funding to buy the hardware for all of the testing. We’ll be able to leverage our cloud solution – have them pay a small fee for the use of these high-powered HP computers and be able to start up their software and begin testing and designing. Or, let’s say you want to get your data off the island, but kept in the OECS (The Organization of Eastern Caribbean States). You can have Antigua as a secondary back-up solution where all your data can reside in Antigua for back-up purposes.”

“Over 12 years ago, we invested in a fiber optic cable that comes into our data center, so we have more than ample capacity to run whatever is needed for internet access, cloud solutions, and so forth,” Salomon adds. “We’re going to be launching the service, because we have the infrastructure to do this. It’s a facility that is up a hundred percent of the time and might as well be leveraged and offered to consumers who want these additional services.”

This year, Antigua Computer Technology will also begin providing cost-effective, high quality, renewable energy solutions for both residential and commercial applications, specializing in the design, installation, support, and maintenance of solar and wind energy systems. “And through a recent partnership with GreenTech Solar, Tesla battery systems, SunPower solar panels, and others, renewable energy solutions will be showcased along with our Schneider electric inverters in our showrooms for our customers,” says Andrew. “The whole idea is to go green and because of our expertise, we have been able to provide these solutions,” Salomon adds.

The Internet of Things (IoT), which provides for connectivity for physical assets as well as their management and tracking is another project soon to be launched. One of Antigua Computer Technology’s objectives is to provide IoT solutions in the area of “smart agriculture,” helping farmers to monitor things such as soil moisture, nutrients, temperatures, etc., so they can yield better crops. “Managing agriculture goes far beyond soil preparation, irrigation, and harvesting,” Andrew explains. “Complexities and fluctuations with soil and environmental conditions can make or break crop yields. Therefore, monitoring the entire agricultural process from seed to shelf is necessary to maintain a competitive edge and ensure profitability, even under challenging conditions. ”

Smart street lighting is another area where IoT technology can help save money and energy. Street light management gives operators “visibility” into street light operations – how much energy is used, control over dimming and on/off schedules, automatic outage detection, and proactive maintenance are some ways in which communities can realize significant savings, while increasing public safety.

Finally, Antigua Computer Technology will be offering its customers the next generation of high speed, wireless internet connectivity. So, after almost 30 years in the business, ACT continues to be a cutting-edge company that is dedicated to keeping Antigua’s citizens connected. “We will continue to make the latest technologies available to our people,” Salomon states. “We have a lot to offer Antigua and the rest of the Caribbean as we unceasingly strive towards our mission of bringing our community into the future.” 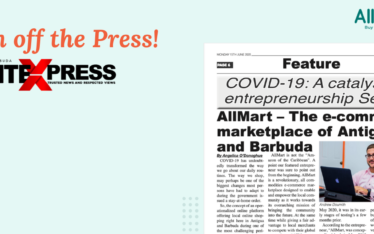 AllMart – The e-commerce marketplace of Antigua and Barbuda 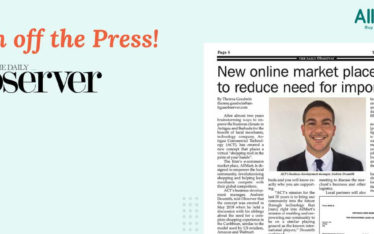 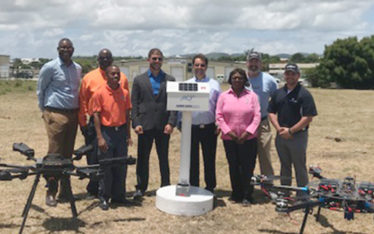 Home Deliveries Possible in the Near Future