A Helping Hand After the Hurricane

arbuda was hit hard after Hurricane Irma swiftly swept in and eradicated much of the once-idyllic island. The crushing Category 5 storm was at its peak when it blasted through the 62-square-mile island on September 5th and 6th 2017. Destruction and doom took over, inhabitants were displaced, and belongings were broken, if not gone for good.

While it will take time for the island and its population to pick up the pieces and resume to life as it once was, or at least a new normal, help from kind-hearted individuals and giving groups from around the world are making the piece-by-piece process a little less painful. People like the founder of TDG Cyber Security and Greenstar in the UK, Steve Tytler, and those who support him both personally and professionally have stepped up and stepped in to give the people of Barbuda a helping hand to handle the hardship, including us at ACT.

As an IT professional, Tytler knew his power to pick up at least some of the pieces shattered by the storm stemmed from his success in his computer-focused career. He wanted to take action or donate but had to be sure the goods and services would go right to the people. By launching a fundraiser with the assistance of a son of Antigua, Alan Weston, awareness was heightened and money was raised to help get the mission moving.

Tytler heard that the Holy Trinity Primary School in Barbuda lost its IT suite, so this was where he’d direct his donations. The school would no doubt prosper from the gift of new computer gear. A donation of 20 HP desktops with 20 monitors to match as well as a LaserJet Enterprise printer and 20 APC UPS units were donated to the school. In this day and age, being connected to computers makes all the difference in a well-rounded, modern education. Tytler and his crew essentially elevated their schooling, something the children of Barbuda would benefit from immediately and well into the future.

At ACT, we did our part by discounting IT infrastructure and products. To get the most devices to the disaster region was everyone’s goal, so slashing the costs enabled Tytler and his team to add to the volume and help more children of Barbuda benefit from these blessings. Although the people of the region are strong and determined to survive and thrive, replacing and restoring these expensive items was not their number one priority amid the wreckage and woes. But what a great way to not only overcome, but to go above and beyond what they’d aimed for not long after Irma did her damage.

Here at ACT, we support communities that need us the most, propelling them into a finer future by pairing with like-minded individuals and groups who pride themselves on helping push others forward. The Barbuda mission is one of many we are thrilled to have connected with, proving that every bit counts, especially when it comes to our children. You never know, thanks to Steve Tytler and his team, the next big computer whiz that’ll bring us even further into the future may be a child sitting at his or her new computer at the Holy Trinity Primary School at this very moment. 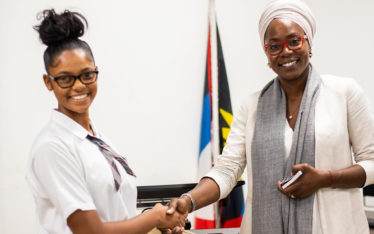